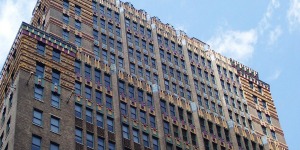 New York real estate is always changing and every turn brings a new twist to the world of commercial office space in NYC. Here is what’s new with 2 Park Avenue, a crown jewel of real estate located between 33nd and 33rd streets on the cusp of Midtown South.

Every commercial building has a face. As the first impression it makes on your visitors, your building’s lobby plays a key role in your image. You may even go so far as to say that the lobby contributes to your company’s brand. 2 Park Avenue has recently renovated its entryway to feature sleek revolving doors, gilded metal detailing, state of the art turnstiles, and high-speed elevators.  The lobby’s glowing ambiance is sure to impress all who visit you, making you glad you chose this commercial space for rent in NYC.

This building’s evolution is part of the Midtown South Renaissance.  TAMI (technology, advertising, media, and information) tenants accounted for over half of the office deals in the area last year. (Bisnow, 2016) Out of all the commercial space for rent in NYC, well-known brands such as Facebook, Google, and Sony have chosen to relocate to this area. (Bisnow, 2016). These famous names will attract retailers wishing to cater to this population, likely driving up the cost per square foot of real estate. It looks like Midtown South is on the uptrend – better get in on the action now!

For more information on commercial space for rent in NYC, email info@corporatesuites.com

Mazzara, Benjamin. (2016, October 3). No One’s Sure What Midtown South Is, But It’s Revitalizing. Bisnow.